Have you ever wondered how Joey – the groundbreaking War Horse puppet – is brought to life?

Ahead of our outdoor screening of War Horse at Latitude 2019 to celebrate 10 years of National Theatre Live, we spoke to War Horse’s Resident Puppetry Director, Gareth Aled, to discover how Joey becomes a living, breathing horse.

Go behind the scenes in our interview with Gareth Aled and find out why animal instinct is central to making Joey believable, what challenges the puppeters face and just how many puppeters it takes to make just one horse move.

Joey is coming to Latitude 2019! Joey is making a very special appearance in The Faraway Forest just before the screening of War Horse, don’t miss out on meeting him in real life.

How long have you been working on War Horse?

I first started with the play in 2013 when I puppeted the heads of Joey and Topthorn in the West End. I performed in the West End for two years and did a small three-month stint in the Netherlands as Head Puppeteer. I’m really passionate about creative engagement and workshops so I’ve done different bits of facilitating for NT Learning and other educational workshops connected with the play, and I’ve been part of the promotional team.

How did your previous experiences help you with the challenges War Horse presents?

The puppetry is astonishing but the thing about this play is that it’s a huge company effort and in my experience, and what I love both as an actor and as a creative, it is a huge piece of ensemble storytelling. That’s not just the cast, that’s the entire company and the sheer endeavour of it. It’s so massive and I’m really passionate about that. It’s the culmination of all my experiences that I feel sit well with this new and exciting role that I’m taking on as Puppetry Director. 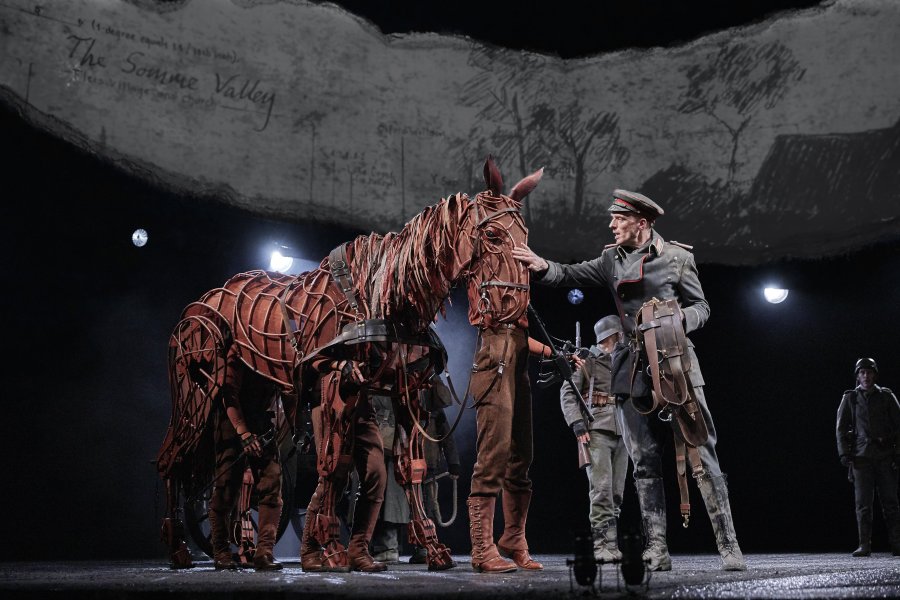 How would you sum up the specific challenges of this play?

It’s a play where you’re going to work harder on stage than you ever have done before and you have to have such generosity of spirit that you believe a bit of wood and cane and mesh is more alive and worthy of the audience’s attention than you are. It’s such a generous thing and that’s a really important value to instill in the company and to maintain as we go to all these different places on the tour, with different shapes and sizes of auditoriums. That spirit and that value is really important. It’s all about facilitating curiosity because the reason the play continues to work is that no-one ever rests on their laurels. You never reach perfection; it’s a constant striving to make it as detailed as possible and that’s a challenge and a real pleasure and a joy.

How many puppets are used in the show?

We have around 23 or 24 puppets and we have an amazing puppet tech department to maintain the puppets and help us creatively. It’s a constant dialogue to ensure these puppets function as we want them to and also with the puppeteers and the surrounding cast that the animal puppets, for example, are believable animals on stage. We’re operating on animal instinct as opposed to caricatures. It’s not Pixar or Disney. These aren’t anthropomorphised animals, they’re behaving like real animals and we’ve got lots of puppets to help us communicate that style and that language.

What are the biggest and smallest puppets?

The biggest is a full-size tank. The smallest is probably the swallow puppets, although they’re operated with really long fishing poles. They’re the smallest puppets but the ones that the puppeteers are furthest away from.

How many people are involved in puppetry for the touring version?

There are 34 people in the cast and at any point in the play any person can become a puppeteer. You might have three puppeteers operating Joey, for example, but there are humans interacting with that puppet, whether it’s pulling the horse around or encouraging it. We require the human interacting with the horse to be a fourth puppeteer so every single person on stage has the responsibility of being a puppeteer, whether they’re interacting with a horse in a key major moment in the play or they are attending to a wounded soldier who’s actually a puppet in the background. Everyone has that responsibility at some point.

What demands does the show place on the puppeteers?

If you’re operating a horse, whether you’re the head or the heart or the hind of the horse puppet, you have two main jobs. There are lots of things you need to be thinking about but you can distil it down to two things: The technical aspect and the emotional task. Technically, the head puppeteer is holding the head up to make it seem like the eyes are seeing and the head is alert and responsive. The ears are emotionally important too; they can tell us a lot about what the horse is thinking or feeling. The heart puppeteer, on a technical level, has to operate the front legs which have a bungie chord that curls the hooves to really sell the horse-like action but emotionally they also create the breath of the horse. The hind puppeteer technically has to maintain the gait of the horse – the trot and the gallop and the cavalry charges – so it’s really important to be specific with the rhythmic aspect. Emotionally, they’ve got these bicycle brake levers on ski poles that operate the tail left, right, up and down to get a nice tail expression. It’s the coming together of all those things, those three puppeteers working together, that really creates a living, breathing horse.

Does the puppeteering ever go wrong on stage?

It’s live theatre so things might happen. The wonderful thing, I think, about any physical ensemble storytelling is that you have a company of people who listen to each other and trust each other. That’s your bread and butter – the ability to listen and to trust. If things do go slightly awry we’ve already created the best possible conditions with a company that fully support each other.

How do the puppeteers get fighting fit for a show?

I think there’s a duty of care on both sides. I can speak from first-hand experience that if you’re a puppeteer you have a duty of care to yourself to ensure that you’re eating correctively. Then the National Theatre has this wonderful support network surrounding the company, more than I’ve ever experienced on any other play both as an actor and as a creative. We have a wonderful team that ensures that care is there.

Are they all ages and walks of life?

It’s a total eclectic mix of experience in terms of the kind of work they’ve done and I think that’s really wonderful. I don’t think it’s as simple as only employing puppeteers who are specifically puppetry-trained. I think it’s wonderful having such an eclectic mix of experience because that means people’s instincts and approaches are different and therefore the culmination of all those ingredients makes the work richer as a result.

Which puppet are you most fond of?

Is there a key to how emotional and real the puppeted animals seem to audiences?

The distinct thing for me is to constantly connect with the truth of the horse and what the horse wants, which is very different to what humans want and feel. We’ve got this incredible lighting design and these incredible projections, the music score is just stunning and the folk songs that weave our narrative together are amazing. But when you’re puppeteering the horse you have to stay truly connected with what the horse wants so if there’s an emotional moment where a human character like Albert is perhaps saying goodbye to Joey it’s important that the puppeteers don’t play the emotion of the human story but that they stay true to the horse’s story. I think that makes it all the more moving.

What research is done into animal behaviour?

Before a puppeteer is on stage before an audience we have two weeks of puppetry school and we then have a further six to eight weeks with the full company and all the while we’re working on technique we’re also working hard with research in terms of horse psychology, behaviour and anatomy as well as researching horses through history. You’re constantly trying to make the work you do seem more horse-like, more detailed and more truthful. I performed the play around 1,000 times and I would never be arrogant enough to say that I perfected it. You’re constantly going ‘That eye line could have been clearer’ or ‘That moment could have been more specific’ and that’s actually the joy of it. It’s that endeavour that makes it all the more rich in terms of the quality of the storytelling and I think the audience can sense

How does it feel to be part of such an iconic production?

It’s a real privilege. It’s a show that has been seen by so many people and it’s held a real place in people’s hearts and in their theatregoing memories. As it continues to be performed and as we tour, new audiences and younger audiences are discovering it for the first time. There’s a real sense of responsibility as a company to inherit what’s gone before, put your own stamp on it, then pass it on.

What is it about the story of War Horse you feel resonates so strongly with audiences?

There’s the backdrop of the First World War and the neutrality of it – the fact that we experience this story through the eyes of an animal that doesn’t take sides. There’s no politics involved, it’s just about the way humans treat the horse and it’s got nothing to do with which side of the war you’re on. That’s a big part of it plus the fact that the story is told with puppets and the style of the show means the audience has to use its imagination to fill in the blanks. You empathise a lot more because you’re so invested in it.

What’s been the nicest piece of feedback you’ve gotten about the show?

There’s been lots. During rehearsals, with full lighting and sound, a member of staff at the theatre who’d never seen the play before was in the stalls going about her daily work and she witnessed the moment where Joey as a foal grows up into an adult horse. That one moment she just happened to witness almost brought her to tears and that’s not even the play as a whole, it’s just one scene.

For more information on NT Live go to ntlive.com. For more on the National Theatre visit www.nationaltheatre.org.uk

Watch the outdoor screening of War Horse and meet Joey at Latitude Festival on 18th-21st July 2019. Tickets on sale now.

Book your tickets for Latitude 2019!