Latitude 2018 is go! The sun was shining down on rolling green hills of Henham Park on Thursday afternoon as we opened arena and warmly welcomed you all to Latitude 2018.

Read on to discover all of the highlights from the first day at the festival, including Sandi Toksvig in conversation with John Lloyd, The Kitchen Cabinet Live,  Idris Elba DJing in the Sunrise Arena and oh so much more.

Step aside Solange,The Killers, and alt-J, the biggest VIP guests of the festival are without a doubt our very own Latitude pink sheep. As the arena opens in the late afternoon, the sheep graze on the fresh grass in their quiet lakeside location oblivious to guests snapping pictures with Henham Park’s resident icons.

But, there’s more to the sheep than meets the eye; the sheep are actually a living art installation called Woollen Deity. Inspired by India’s Holy Cow, the sheep’s presence over the weekend is there to celebrate the beauty and heritage of Suffolk and to remind us of our connection with nature. It helps too that they’re absolutely adorable. 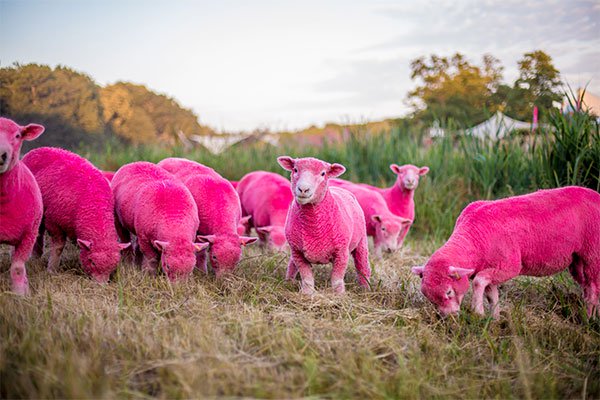 In a Latitude first, Radio 4’s The Kitchen Cabinet has come to Henham Park to answer all of our burning culinary questions. In a secret location, MasterChef judge Jay Rayner introduces the panel which includes Andy Oliver, Tim Hayward, Jordan Broke and Zoe Caplin all poised and ready to dish out their expert foodie advice. Also, on-hand are Adnam’s Master distiller John Maccarthy and Charlie from Street Feast vendor, Fundi.

Some of the tasty topics covered include choosing the right toppings on pizza, cooking with vodka, what to cook if you can’t cook and much more. But, to hear all the tantalising answers you’ll have to tune into The Kitchen Cabinet when it’s broadcast live on Radio 4. 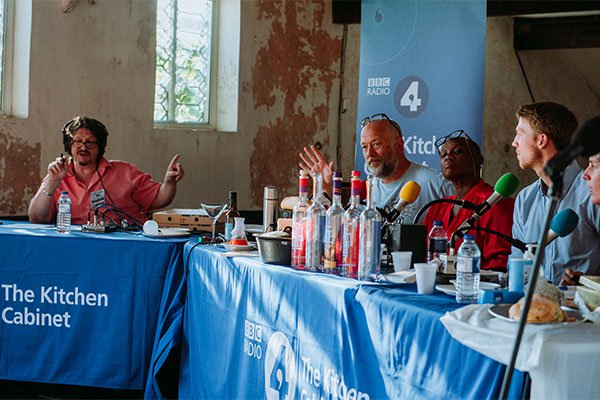 If you had taken a stroll to The SpeakEasy on Thursday afternoon (whilst the rest of the arena pumped out inviting sounds), you may have felt like you’d wandered into a living room chat amongst old friends. Such is the natural chemistry between Sandi Toksvig and QI creator, John Lloyd. Sandi Toksvig’s dog Matilda even puts in a brief appearance at the start.

Opening with some pub quiz calibre titbits such as: yawns are only contagious to two animals – wolves and budgies. The conversation shifts between anecdotes about free tube travel and the meaning of life.

Early on, Lloyd remarks that QI was made with the idea that everyone is born a genius a sentiment that is welcomed by the age spanning crowd. On their journey through memories new and old, Toksvig & Lloyd discuss the near impossible task of resisting all those cakes featured on the much-loved Great British Bake Off.

Toksvig and Lloyd leave the bar set high for the rest of the weekend, their Q&A is a natural flow of dialogue between the two old friends. There’s a collective sigh of sadness as the pair leave the stage, with a great many left knowing exactly how it would feel to nip round to Sandi Toksvig’s house for a cuppa. 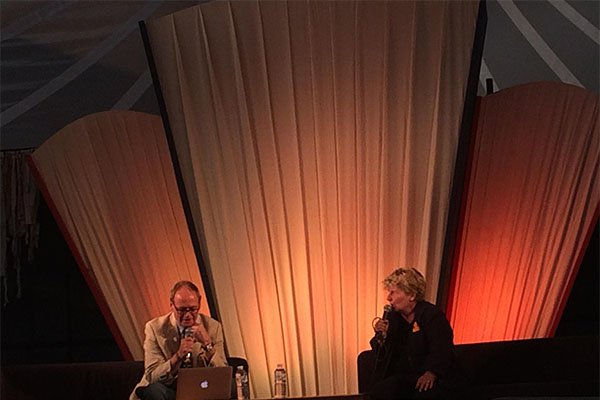 Latitude Festival has some exceptional vegetarian and vegan options to choose from this year. From pulled jack fruit burgers to the incredible To-Fish Tacos, each dish at Club Mexicana is made to order in front of your very eyes.

For the braver people, tacos were able to come with pickled chilies, but were light and balanced even without. The Salsa Verde providing just enough kick to get your taste buds craving another plate almost instantaneously.

The tofu even managed to have a light smoky flavour to it, further disproving the notion that to eat vegan is to eat boring. A light sprinkling of pickled cabbage and sour cream topped the tofu creations, which could trick even the most avid fish lover into thinking they were the real deal. 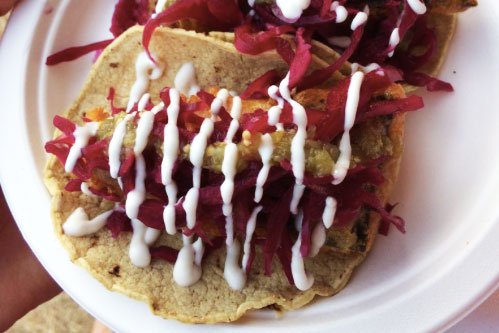 Coming to Latitude is about trying something new, so where better to put that to the test, than in the cosy Lavish Lounge with Instant Scorchestra.The immersive film and live experience has audience members grabbing everything from kazoos to a shruti box to join in with the professional musicians to improvise an instant soundtrack to the 1920s films projected on the screen.

Led by Jason Yard on saxophone, both the amateurs and professional build the tension as daring acrobatics fly across the screen at a turn of the century circus. As the performance goes on through until midnight the menagerie of music ever evolves as yelping vocals mix with strummed guitars, climbing clarinets, soaring violins and many more instruments plucked from Instant Scorchestra’s table of musical wonders.

The initial artistic music and dance displayed by CRXSS PLATFXRM on The Waterfront Stage leaves some in the crowd stunned, others confused as to what they might be about to witness.Artists from Senegal, and the not so exotic London, follow one another with interpretive dance and even more subversive sounds.

With the crowd suitably perplexed, Denzel Himself pounds onto the stage channelling the spirit of grime greats whilst rocking some Gregory Porter inspired headgear. His flow is poetically urban, highlighting a refusal to compromise his London roots. He is joined onstage by his sister, as they launch into a new track called ‘Melty’ which quickly raises the crowd to their feet both in front of the stage and on the bridge alongside.

As soon as the spirit is raised, CRXSS PLATFXRM launch into playing urban classics from the 90s to today, their choreographed dance moves causing a climatic stage invasion. 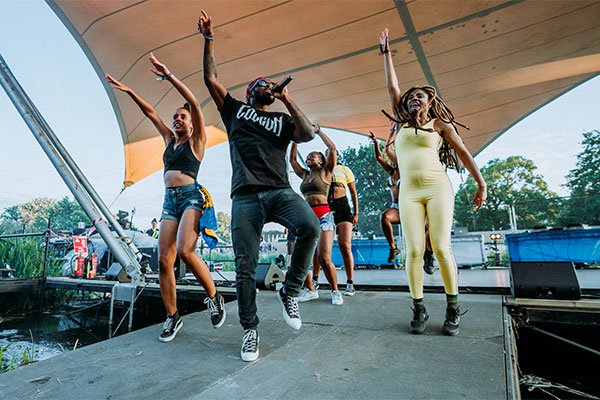 Late night at the Sunrise Arena is where you’re always guaranteed to find an epic party and on the first day of Latitude the arena stayed true to its reputation as actor and DJ, Idris Elba, took to the decks. The set is being filmed for an upcoming comedy series, but Idris’ set is definitely no laughing matter as he has has sprawling crowd right in the palm of his hand as he drops the first thudding beat.

Decade spanning classics are given the deep house treatment and the crowd goes wild every time; the tent is bouncing from the front to the back for Cyrpress Hill’s ‘Jump Around’ and Disclosure’s ‘Latch’ erupts into a mass singalong.

The crowd chant of ‘Whoop There It Is!’ ricochets around the tent in appreciation as Idris keeps it coming with Tori Amos’ ‘Professional Widow’ , a massive mix of MGMT’s ‘Electric Feel’ and a brass infused mixed of Childish Gambino’s ‘This Is America’. As the sun drops in the sky and the tent still in full motion, Idris set is the perfect way to start Latitude 2018. 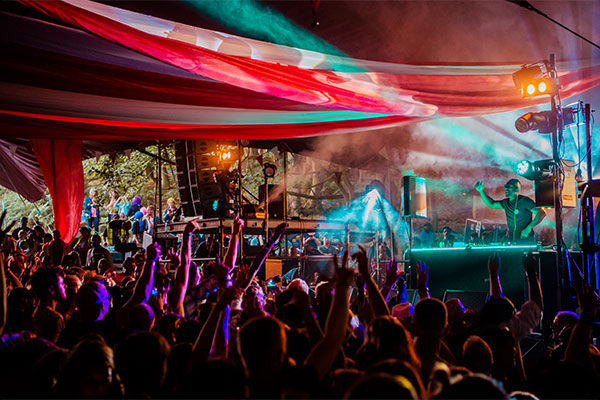 Balaklava Blues marry the past and the future by twinning remixed traditional folk songs with vintage visuals of a war torn Ukrainian steppe; tonight this is mirrored in the Latitude audience as both young and old are entranced by the Ukranian’s duo’s late night performance in the Music and Film Arena.

It’s a set of stark contradictions to spark your mind and move your feet; creators Mark and Marichka Marczyk sing seemingly carefree melodies to poppy techno beats worthy of PC Music, as startling visuals of missiles being loaded and machine guns being fired are projected behind them. Opposites attract in this set as jarring subtitles like, “this is not your place, you can only stay here temporarily” are over-layed on top of colourful Soviet cartoons as techno beats build to a crescendo.

Walking out of the arena, Balaklava Blues’ set leaves questions as well as beats ringing in your head. 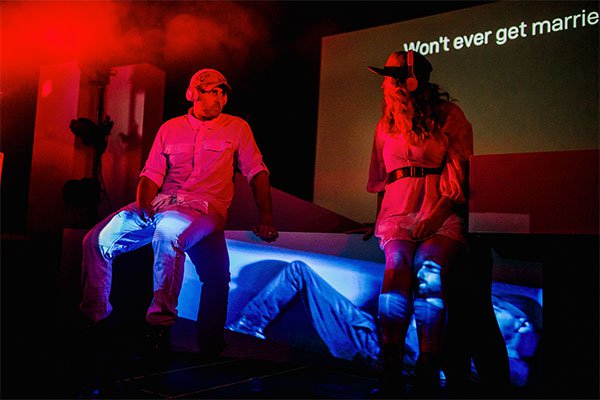 The Octavia Poetry Collective were born from the lack of representation for women of colour within the world of poetry. As the seven young women take to the stage in The SpeakEasy, the crowd hushes in awe at the presence they naturally command before a word has been uttered.

Each recites with such clarity and assuredness on heady subjects that veer from menstruation to having immigrant parents – all evidently very close to their collective hearts.In particular, one of the girls introduces her selection of poems as being almost exclusively about death, if possible the crowd become even more attentive and quiet as the difficult subject matter runs through their ears.

The sisterhood connecting these ladies can be felt all around the tent; hands are interlocked and backs are gently rubbed as the individual women puts their emotive forward for each line.

She Shine On literally lit up the site late in the evening as 20 dancers, adorned in dresses and flags decorated with fairy lights, processed through the arena with an eerie yet mesmerising calm.

Dancing to the solo beats of drummers from Joji Hirota’s renowned London Taiko troupe, the dancers impactful display was a technicolour celebration of sisterhood and the ongoing Worldwide women’s movement. With a growing crowd following the parade through the site, their message and image is forever etched on our minds. 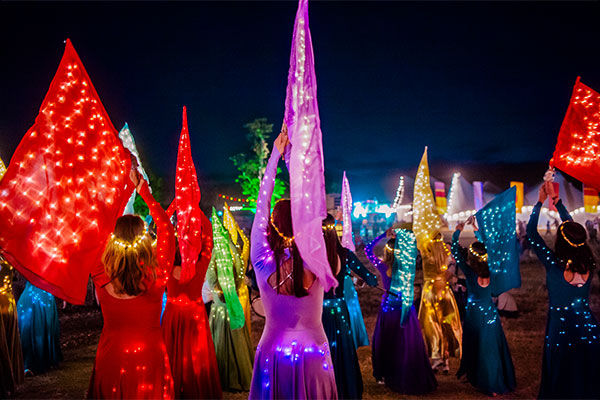 The SpeakEasy is full to the brim with excitable fans of the sadly no longer with us, Prince. There’s many a quizzical eyebrow enquiring as to what is actually about to happen, but few could have predicted comedian and star of Mock The Week, Marcus Brigstock taking to the stage dressed as the Purple One himself – ready to lip sync like his life depended on it.

Crowd members are invited onto the stage to perform Prince’s greatest hits, with the best lip syncer choosing a charitable cause for Brigstock to donate his fee too. There are gasps of disbelief as young teens are able to recite ‘Raspberry Beret’ and ‘I Would Die For You’ with pure accuracy and vigour.

Confetti canons, feather boas and glitter explosions keep the party momentum flowing all the way through until 1am. Brigstock has provided his public with a celebration worthy of recognition, giving nothing less than 100% all through the one of a kind party. Princefest is how you celebrate the life of an icon. 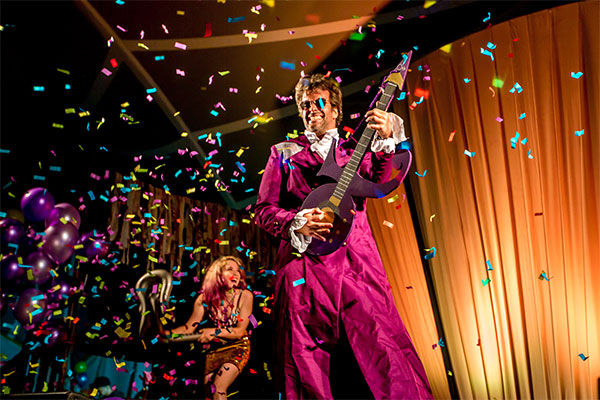 Read our Friday Highlights – Part 1 to marvel at the absurd with QI Live, be inspired by Guilty Feminist’s hip hop musical Suffraggedon, get the giggles with Comedy Arena headliner Bridget Christie and more.

Visit our photo gallery and video highlights to relive more music and magic from Latitude 2018.