The sun may be beginning to set on Henham Park, but Latitude 2018 is far from over as we celebrate the last evening with Rag’n’Bone Man, Adam Buxton, headliners alt-J and more in our Sunday Highlights Part 2.

IDLES performances last year went down in Latitude legend; the band finished their explosive Lake Stage show with frontman Joe crowd-surfing his way from the stage and legging it up the hill into the woods, like a punk pied piper with the audience behind him, to the BBC Music Introducing stage for a second dynamite set. It’s a lot to live up to, so no pressure boys.

Taking to the BBC Music Stage dressed in George Michael’s ‘Club Tropicana’ wardrobe Bristol’s finest tear into ‘Heel/Heal’, the rabid opener of their acclaimed debut album Brutalism, with as much venom as when it was first released. ‘Faith In The City’ follows with shouts of “praise the Lord!” and it’s clear on this Sunday we’re in the church of IDLES.

It’s a set rammed full of unforgettable moments. Before ‘Danny Nedelko’ they announce the gender of a couple in the audience’s unborn baby with the aid of pink confetti. During ‘Divide & Conquer’ guitarists Lee and Mark dive into the crowd, when they return they’ve got two guys from the audience, Ollie and Paul, with them; they take over playing guitar with Joe running around with Ollie on his shoulders, whilst belting out Mariah Carey’s ‘All I Want For Christmas Is You’.

The crowd moshes hard throughout, not even taking a breath for new tracks ‘Samaritans’ and ‘Love Song’ from the band’s upcoming album ‘Joy as an Act Of Resistance’, which are met with an equally sweaty adoration.

During ‘Well Done’ Joe changes the lyrics to “Come to Latitude they said, it will be fun they said”. As the band close with tabloid savaging ‘Rotweiler’, it definitely was.

The rise of Rag’n’Bone Man has been nothing short of meteoric, and even in mirrored sunglasses it’s obvious he’s taking in the sight of his large main stage crowd. His voice is faultless throughout; the soulful rasp effortlessly rising to the occasion.

Couples slow dance together during ‘As You Are’, revelling in Rag’n’Bone Man’s words and the sentiments that they echo. He dedicates a new un-named song to his young son, a tender moment that visibly means a lot.

The intro to ‘Human’ is met with loud cheering and there’s barely one person left not singing along in the Obelisk Arena. Just as the song seems to come to a close, Rag’n’Bone Man and his band launch into a free-styled ending with rap verses thrown in for good measure. 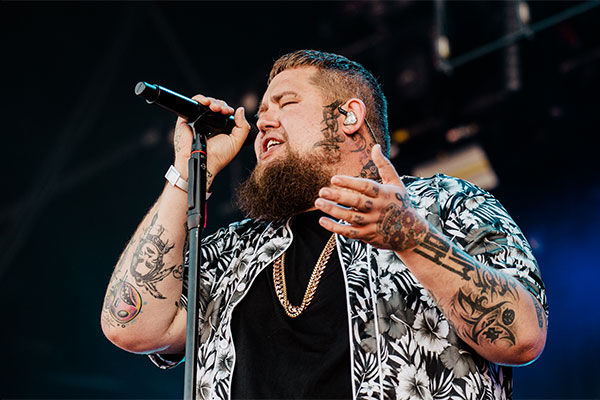 Happy Birthday, Bug! Friend of Latitude, Adam Buxton takes to the Music and Film Arena to celebrate 10th anniversary of Bug – his unique look at  electric and eccentric sides of the music video.

Bug X is a window into the world of Buxton. He interweaves his clips with pieces of his podcast and his time as the Adam of Adam and Joe. Of course, YouTube comments are a crowd favourite, especially RAUL8604 (the 8604th of the RAUL clan) and his confusion over the band OK Go.

It’s obvious the show comes from Adam’s love of the medium. He gives so much backstory to the behind-the-scenes brains, and fills our time with as many videos as possible. Check out the ‘Masterchef Synesthasia’, The Catholics’ ‘Dog Gone’ (starring Adam’s dad) and the classic ‘Witness the Fitness by Roots Manuva – a song so old it’s in 4:3 – “your parent’s ratio”.

We can only end this with a BUG classic to celebrate its tenth birthday. Here’s to many more decades, we look forward to counting them.

Wolf Alice front woman Ellie screams, “Latitude how are you? HOW ARE YOU?” And, you know right down to your bones that the next hour is going to be a raucous set.

The band ease in with the hazy riffs of ‘You Loves Whore’ washing over the sunkissed Obelisk Arena; it’s the calm before the storm as the band rip into the curled lip snarl of ‘Fuk Yoo’ from their last album ‘My Love Is Cool’ and any sense of calm is shattered. ‘You’re A Germ’ chases it up as Ellie howls and the guitars scream back before being quenched by the dreamy daze of ‘Don’t Delete The Kisses’.

Bassist Theo asks the audience, “how many of you came here with a friends? How many of you have made a friend here? Here’s to making friends everywhere”, before adding, “I love you Gareth Southgate!” The opening chords of seminal track ‘Bros’ ring out and another magical Latitude moment is made.

Wolf Alice, we won’t be deleting the kisses at the end. 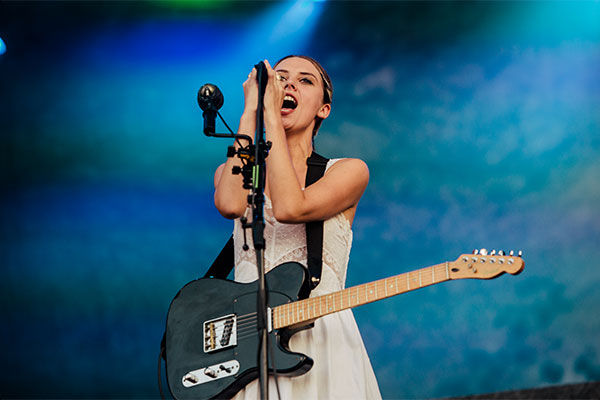 To replenish our energy levels we couldn’t help but stop by Yum Bun at  Giant Robot. They serve what is traditionally known as ‘Gua Bao’ – a handmade, folded wheat flour bun which is steamed to perfection.

We opted for the crispy tofu topping and threw in some seaweed fries to round off our meal. No cutlery needed, we scoop up the fluffy bun and bit into a whole new world of flavour. The crispy aromatic tofu is accompanied by garlic choy sum and chilli pickles which together create a lovely balance of sweet with the right amount of heat.

With not much time to spare we made quick work of our seaweed fries which, thanks to the saltiness of the seaweed paired with the delicious tangy black bean mayo dip, left us longing for more. 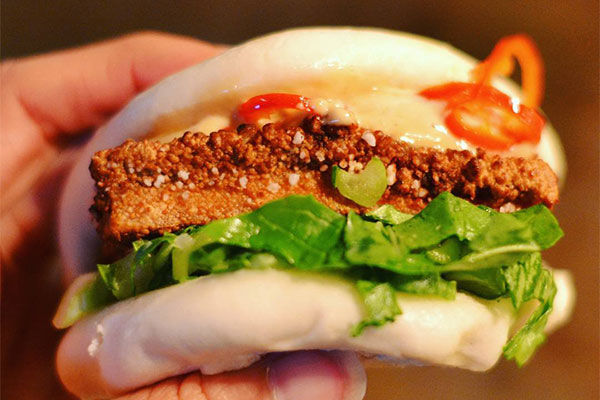 Superorganism win the prize for the most shows played at Latitude 2018 with this, short but sweet, secret set in the Sunrise Arena taking the tally up to three shows in just one day. This surprise set has drawn people up the hill and into the woods for another watch of their incredibly unique presence.

The band sit on the floor amongst props, like beer cans and apples; during ‘Something For Your Mind’ they take a bite from the apple. The crowd sport confused yet impressed expressions, their minds being blown by how the band performed as a collective unit.

Despite being made up of artists that initially lived across the world, Superorganism work as one tight and cohesive unit, allowing the band’s personality to shine. As the set draws to a close it’s clear after today Latitude is now an honourary member of Superorganism.

Final BBC Music Stage headliner, Jon Hopkins, is behind the decks summoning up serious sounds and beats that reverberate around the tent if not the whole of Henham Park – it’s that intense.

People dash into the large tent from all directions, throwing their best dance moves with a collective air of celebration. Mixing together fast-paced beats and pumping house music, Hopkins set conjures up an otherworldly atmosphere that feels as though it landed from out of space.

The animated visuals on the big screen take it to a whole new universe as shapes and colours smash together and pull apart. The technicolour collision reaches light speed when two dancers take to the stage, armed with glowing bars, and throw moves worthy of Luke Skywalker.

As the show ends whispers abound that Jon Hopkins is playing a secret set in SOLAS. The rumours are true as Jon Hopkins, barely breaking a sweat, delivers another phenomenal set for the lucky few in the woods – it really is late night Latitude at its best.

The festival may be over for another year, but thanks to Jon Hopkins and you it went out with a spectacular bang. 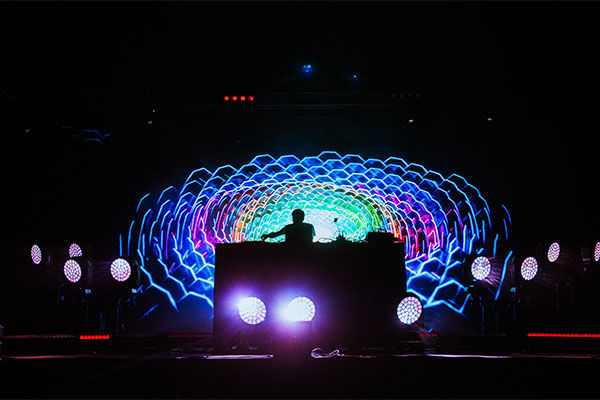 We always think it’s best to finish a party with a bunch of friends. Which is why we see no better closer for 2018 than alt-J.

This is a band at their most assured and triumphant yet, a band with a set fully formed to hold on to everyone within earshot and not let go from the first attack of opener ‘Deadcrush’.

Not that much is needed, this is a crowd that matches the band word for word. During ‘Tessellate’ a large proportion of the crowd are having a near transcendental experience.

Many bands this weekend have commanded the stage, but not many have also controlled the 20ft space above them. Poles of light emanate from the Obelisk ceiling and floor, splitting the band in three. At a whim they create a rain shower, cages for the trio, piano keys, even joining in for a spot of light accompaniment during the a cappella harmonies of ‘The Ripe and Ruin’.

It’s on Gus to say exactly how we feel. As he mentions, Latitude and the band have such a history (they made their debut on the Lake Stage in 2012) and we love them playing here as much as they love playing. Which is why we have every faith in ‘Breezeblocks’ to definitively sign off of the festival and create an Obelisk memory.

Thanks for that, boys. We’ll see you around. 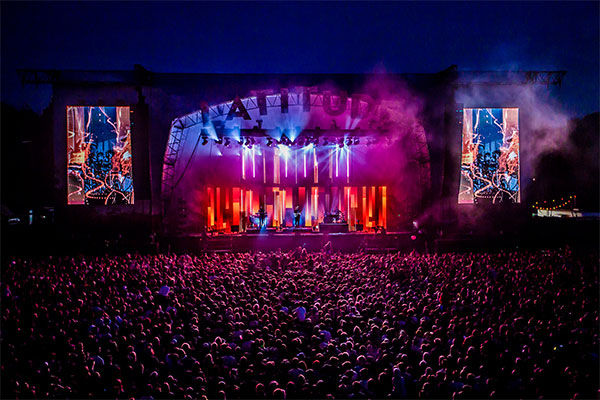 The final beats play out deep into the forest and people stroll back to their tents for the last time as the sun begins to rise and Latitude 2018 draws to a close.

Another magical weekend is over, but we’ll see all our friends again for more music, arts, theatre, dance and laughter for Latitude 2019 on 18th-21st of July 2019.