On the final blissfully hot day in Henham Park, we crammed ourselves full of all of the wonderful music, arts and food on offer for one last time at Latitude 2018.

In our Sunday Highlights Part 1 we dive into the mind of Richard Ayoade with Mark Kermode as our guide, dance like no one’s watching to Fickle Friends, welcome back Ballet Boyz with open arms and much more.

What if Romeo and Juliet didn’t die? What if the tale of tragedy didn’t end with poison, but they continued their lives? Lost Dog’s Juliet and Romeo imagines the couple years ahead; life not being cut short but meandering on.

The play forms the basis of their couple counselling, going back into their memories to see how moments in their life have got them to where they are now. Years in, considering separation, but wanting to work for their child.

It gives a knowing nod and a little wink to the famous play, but takes it in a thoroughly more modern route. It brings their marital issues and their struggles with their daughter to the fore, and they feel about their whirlwind romance is now that the years have passed.

The staggering choreography between the two, heighten the emotion felt during the memories and add a dynamic element to the play. The Theatre Arena is left breathless by the intensity of this performance.

Lost Dog: Juliet and Romeo is wickedly funny even beyond the meta humour of reviving one of Shakespeare’s most famous play to life. 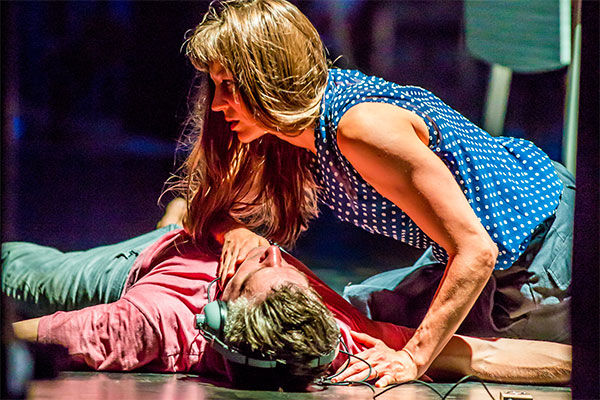 Latitude is a treasure trove of new talent and The Lake Stage is the perfect setting to unearth some shiny gems. Underneath the stage’s new billowing ribboned canopy, the soulful sounds of Caswell are as precious as the Obelisk Stone.

A local Suffolk singer-writer, there’s understandably a large crowd for her early afternoon set. Singing since a toddler and writing songs since she was 10 years old, Caswell music is captivatingly cool with soul, jazz and pop flowing effortlessly over each other.

The laid back, shimmering synths of ‘Cry’ ease everyone into the set with the temperature turned up only slightly for the defiant, ‘Run Me a Cold Bath’. Latest single, ‘Lie To Me’, shows Caswell development as a musician as her syrupy rich vocals trickle with ease over the complex, weaving rhythms played by her band.

Caswell performance today shows she’s a local treasure to be savoured and shared.

In continuation of Mark Kermode’s conversational series with the cream of directors, Sunday sees Mark welcome Richard Ayoade to the stage in the Music and Film Arena.

As anyone who knows Richard well can imagine, the talk is full of self-deprecating humour and bags full of fun. Rather than talking about his own films, the pair start by discussing the 1989 Patrick Swayze movie ‘Road House’ in detail. The trailer, drawing chuckles from the crowd, is accompanied by Richard extolling the importance of being nice in action movies, but also when it’s ok to take out an entire room.

He eventually, somewhat reluctantly, discusses his own movies. He believes his role is just to “have a set of opinions” but grow in passion when he talks about the French New Wave’s influence on ‘Submarine’ or the genius of Buster Keaton guiding scenes of ‘The Double’.

A question from a child in the crowd so very nearly gets an exclusive out of the director as he admits that he is indeed co-writing another movie. When pushed by Mark, the most that can be gleaned out of him is that it’s around 93 pages long – so close to a Latitude scoop! 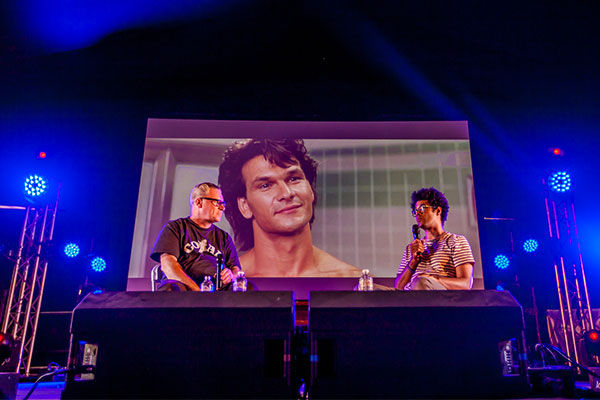 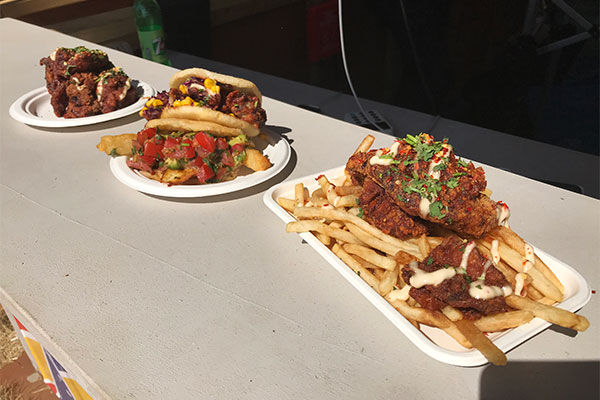 Character impressionist Lolly Adefope’s ability to mimic every tiny mannerism of those she’s mocking is phenomenal. From slight hand movements to comedic pauses, in the Comedy Arena this afternoon Adefope delivers impressions of overzealous university staff, right the way through to a show-stopping rendition of Adele’s ‘Make You Feel My Love’.

Taking a different slant on impressions, Lolly Adefope goes for more generalised stereotypes that much of the audience can strongly relate to. Some of the younger audience members sport confused faces, but enjoy the more niche approach nonetheless.

Adefope brings the show to a close with segment about Hermione from Harry Potter being cast as a woman of colour; the accuracy of her portrayal is spot on whilst still maintaining her own unique personality and style. 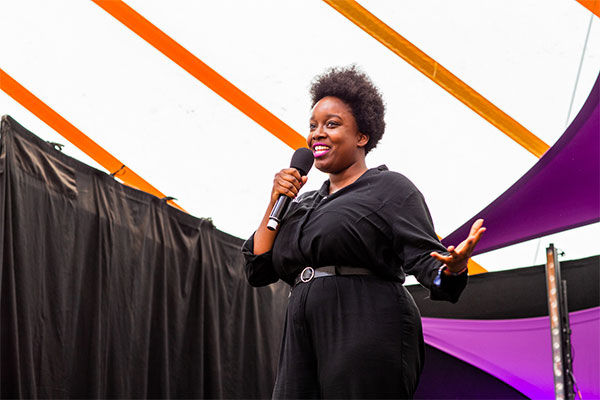 Draping the stage in palm trees and ferns, Fickle Friends have the tropical island feel down to a T. Singer Natti bounces her way through f ‘Swim’ and ‘Hard To Be Myself’, which she dedicates to people experiencing anxiety.

The guitar solos instantly get the enthusiastic crowd grooving along, transporting the Obelisk Arena from a field in Suffolk to a pool party on a faraway island. The glittery masses match the upbeat pop energy of the band; not even the sweltering Suffolk sun can stop people resisting the sparkly songs.

Armed with an array of tracks that provide the perfect accompaniment to the late afternoon haze, Fickle Friends are at home on the main stage. 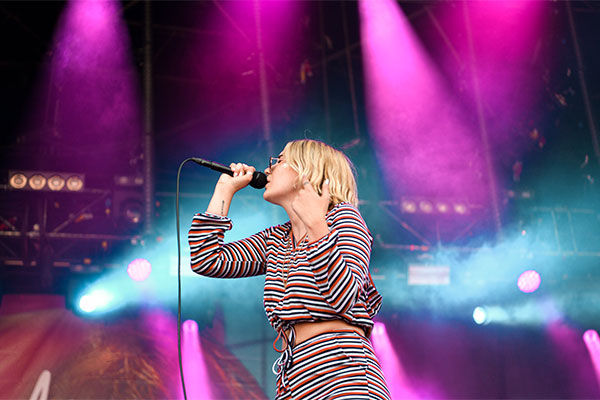 The spirit of 90s riot grrrl culture is alive and well with Projector, who takeover the Alcove stage with gusto. The band’s journey to Henham Park was secured when they were picked by Festival Republic’s ReBalance programme, which gives support to women in bands and female artists.

Lucy Sheehan stops people in their tracks with her broody bass lines and her commanding vocal. The grunge movement is in good hands with Projector, who switch between male and female vocals that change the dynamic of the performance and keep it fresh and innovative.

Flitting between loud rock to a more considered indie style, Projector show off a versatility that few bands would be able to echo.As the crowd comes alive the band’s confidence grows with Sheehan strutting about the stage, safe in the knowledge they have lighted the spark that will hopefully see them rise up future festival bills.

‘Fourteen Days’ is perhaps the most literal title on the Latitude bill. It’s the premise and indeed challenge created by The Ballet Boyz who worked with esteemed choreographers and composers in the space of just two weeks to put together this afternoon’s piece on The Waterfront Stage.

Human Animal’ begins with playing with the concept of time. As the percussion ticks away like a playful procession of time, their movements across circle the stage like a clock while they amplify human movement with leaps and bounds.

In comparison, double header ‘For Us’ is a much more thoughtful piece. Playing over a stripped back orchestral quartet, the delicate performance is an intimate and fluid combo that plays to the boys’ technical prowess in creating emotion.

The Indicator Line’ harks back to an era of the Irish working class and is all brawny movement and hefty impact. While the music thumps and soars, the aggression between warring factions is portrayed with powerful lifts and intense tap battles.

‘Fallen’ feels almost cinematic. With a soundtrack that wouldn’t feel out of place in a Marvel movie, what starts as the full set of the acclaimed troupe becomes a climactic battle between pairs, only to return to the full crew for a final showstopper. 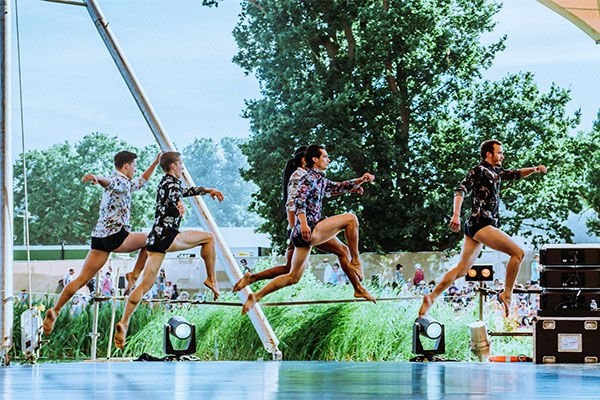 In our Sunday Highlights Part 2, we’ll be taking in IDLES, Rag’n’Bone Man, Adam Buxton, our final headliners alt-J and many more delectable music and arts delights from Latitude 2018.