England are out of the World Cup and just an hour earlier lost out on third place to Belgium, but that doesn’t mean the special moments are over. In the BBC Music Stage tent the sound of football chants playing are out over the PA, and the anticipation is at fever pitch as today’s secret set is about to start.

Liam Gallagher swaggers out onto the stage in one of his trademark parkas and the tent just erupts. If there was one frontman that can wash away the defeat and bring us all together again, it’s Liam here today. Like Harry Kane he always strikes to score; the twang of ‘Rock n’ Roll Star’ plays out and everyone goes wild. Phones are straight up in the air to take photos as people can’t quite believe Liam Gallagher, one of the most legendary frontmen of the 20th and 21st century, is right here in Henham Park.

It’s a set for the generations; teenagers dance and singalong with their parents as Liam belts out ‘For What It’s Worth’ from his solo album ‘As You Were’ and ‘Definitely Maybe’ classic, ‘Some Might Say’. ‘Whatever’ needs no introduction as the crowd do the job for Liam and the tent is filled with the ‘dah-dah-dah-dahs’ of the orchestral intro for a goose-bump moment.

As the iconic drum intro of Oasis’ debut single ‘Supersonic’ kicks in, it’s clear why Liam has been at the top of his game for the past 27 years; as he beats his maracas on chest and at crowd – we all know we’re in this together. The set comes to a climatic close with a hat trick of ‘Cigarettes And Alcohol’, ‘Wonderwall’ and the euphoric hands-in-the air closer, ‘Live Forever’. As you were. 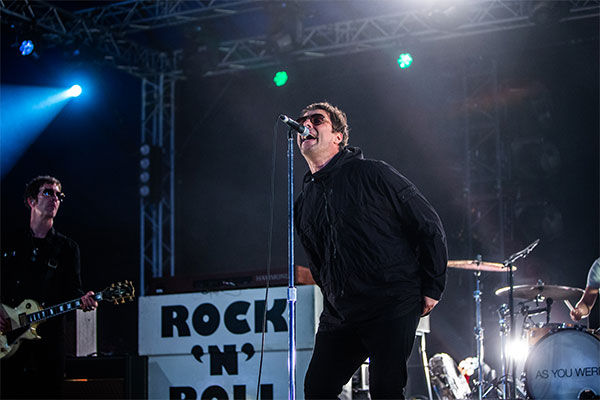 Late Saturday afternoon took a turn for the wacky in the Comedy Arena, but when Harry Hill is the  headliner it’s totally expected.

The sultan of absurd, Hill has been delighting audiences of millions with his surreal stand up for two decades now, and his new material shows no sign of changing tact. He’s firing out jokes at a rate that makes our collective jaws ache; his material on how great the 70s were (if you ignore all the bad stuff) packs more in than the widest flares.

Harry really shows he’s a master craftsman when he stretches out a joke so far that it becomes like silly putty (emphasis on the silly). Replacing the words to ‘No Woman No Cry’ might seems like a simple idea, but when he’s clambering over half the crowd just so someone can shout “You’ve Been Framed!” at him; it shows how the best comedians can work a room as big as the tent.

And to the child who won a free bin bag during the impromptu dance party, let’s hope you always cherish your special balloon. 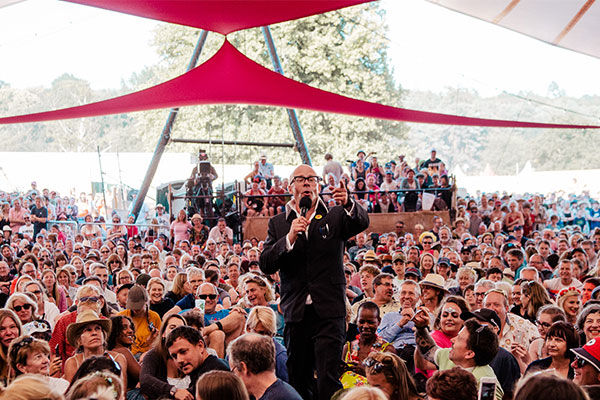 Back over to the Comedy Arena and self-proclaimed gangly comedian, James Acaster, walks onstage to a crowd so eager to hear him, there are people moving fences outside in order to press their ears in the hopes of hearing the set.

Much of Acaster’s material focuses on his 90s upbringing, with the importance of All Saints’ debut album taking centre stage early on. It paves the way for a long form anecdote about the time his girlfriend left him for Rowan Atkinson, that sees the audience holding their aching sides from laughter.

Acaster jumps through a number of relatable spicy topics including to name a few: pen pals, smart phone use and being too old to jump on bouncy castles. As Acaster bids his goodbye, it’s clear this is a man able to take his adorably awkward humour to stand amongst the British comedy greats.

The sound of an authentic Italian wood fired pizza tantalizes our taste buds, so we take the short trip to the med via Fundi. The hand-built portable pizza oven delivers delicious, thin crust pizzas time, stretched and handmade in front of our eyes, these pizzas don’t scrimp on the toppings – from a classic Margherita with some extra special mozzarella fior di latter to a delectable Affumicata with smoked mozzarella and pancetta. Flopping off the side of our plate, these more than satisfy our bellies. 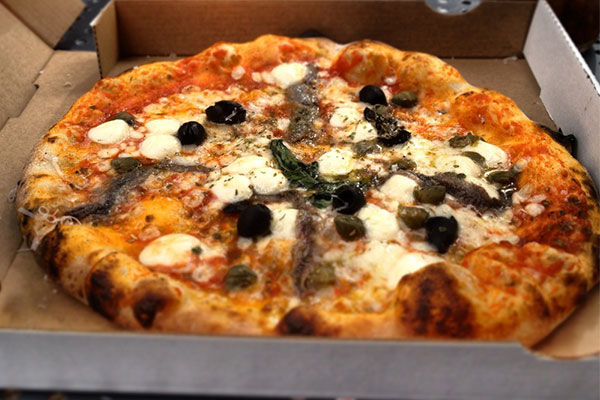 There is a joyful glow to Jessie Ware that transcends the brightness of the sun beaming down on the Obelisk Arena. Her stage patter landing in all the right places, her razor sharp wit and humbleness is as relatable as her Table Manners podcast.

Most recent album ‘Glasshouse’ takes centre stage, as the gospel inspired ‘Midnight’ draws in the cooling sky. Ware’s sequined dress glistens in the dusk as her voice excels and stops people in their tracks.

Taking time out to thank her family and dedicate some of her most tender love songs to her daughter, Jessie’s one of a kind voice radiates through the crowd, who sing every word whilst embracing strangers around them just as closely as they would an old friend. 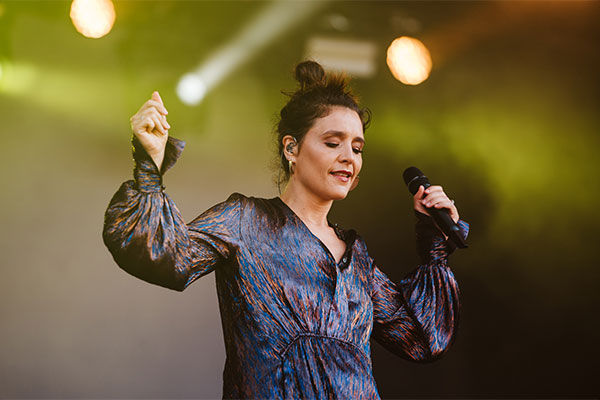 In 2015 three black women are refused entry into a nightclub. In 1981 Grace Jones releases Nightclubbing, one of the landmark albums of the era. While you may see the obvious connection, in this autobiographical piece the ties runs much deeper, identifying racial tensions and gender identity in the 21st century

It’s raw, experimental and unapologetically so. Grace is an obvious influence on the performance. Rachael Young, who is authoritatively front and centre, channels her intensity and command of an audience; costuming also gives a heavy nod in imaginative ways. One moment sees Rachael drape cable over her body, elegantly piecing together a unique version of Grace Jones’ famous cloak.

While Rachel’s poetry jumps between decades, drawing comparables near and far between their story and Jones’s life, it’s the electronic soundtrack that consistently creates the unsettling tone that complements perfectly and lets it linger around the Cabaret Theatre. 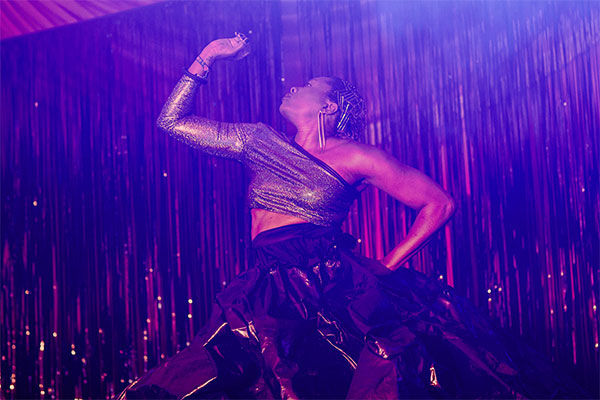 With an armoury of short sharp hits up their sleeves, The Vaccines quickly work their way through ‘Wreckin’ Bar(Ra Ra Ra)’ and ‘Teenage Icon’ at a mile a minute. Most recent album ‘Combat Sports’ is put on a back burner in favour of their more well-known hits for this evening’s set in the Obelisk Arena.

Frontman Justin Hayward-Young pours out his soul out to deliver one of their biggest ever sets. Guitarist Freddie Cowan shreds like there’s no tomorrow, striking his instrument with passion and pride in equal measure.

The Vaccines take the crowd on a journey and leaves them suitably ready for the evening’s headliners. Young and co depart in a haze of sweat and distortion, with many in the audience trying their best to beg for one more song of raw guitar power. 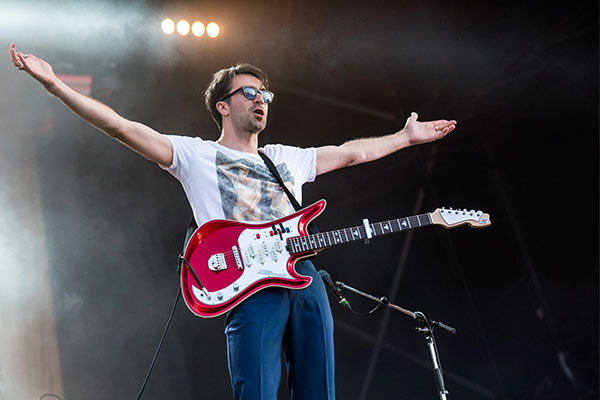 We’ve just witnessed the future. French-born, South London-raised Octavian has been leading the charge on an already resurgent UK rap scene, and now the Latitude audience at the Sunrise Arena get to see the king-in-waiting for themselves.

For the most part, this is a set that feels like it’ll be haunting the woods for years to come. He’s right out the gate with a style that’s dark, deep and heavy. The rapper flips between quickfire lines and drawn out, mellow singing; telling stories of a life already fully lived.

You know you’re onto a winner when even your new tracks cause a scene of epic proportions; tunes that won’t even drop for a couple of weeks whip up a frenzy – the crowds constant cheers of “whoomp there it is” feel like a stamp of approval. Keep both eyes firmly on Octavian, we’ll be seeing him again. 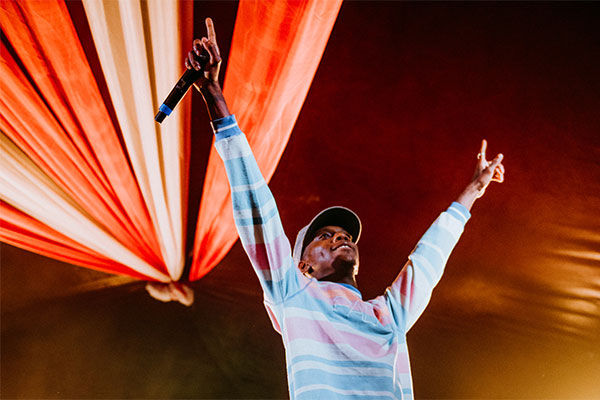 It’s the moment we’ve all been waiting for and we’re not disappointed as The Killers headline set in the Obelisk Arena is wall to wall hits.

Right from the first disco beats of opener, ‘The Man’, Brandon Flowers leaps about the stage like a kid on Christmas eve with a million dollar smile. And, the sold out crowd are with him every step of the way as he sings out Hot Fuss classic, ‘Somebody Told Me’.

It’s not just the crowd that are lapping up Flowers’ dazzling showmanship as none other than Liam Gallagher, fresh from his BBC Music Stage secret set earlier in the day, swaggers out just as Brandon’s mid-way through inviting a fan on stage to drum. He showers Brandon with praise for being a “rock n roll star” and then leaves Las Vegas’ finest to go on with the show. As you were.

Henry from Cambridge must be pinching himself that he’s on stage with THE KILLERS as he takes to the drum stool, but you can’t tell as bashes out perfectly for ‘Reasons Unknown’ and the audience is stunned beyond disbelief.

It’s no secret that Brandon is an Oasis fan and you can see the glee all over his face when the band launch into familiar chords of ‘Acquiesce’, knowing that Liam Gallagher is in the wings watching them play.

Before a ‘Dustland Fairytale’ Brandon gets everyone to hold their phone screens, lit up, in the air for a magical moment. Pink streamers fly from the stage for ‘All These Things That I’ve Done’ as the crowd shouts along with Brandon with every inch of their being to The Killers’ unofficial motto, “I’ve got soul, but I’m not a soldier”.

The band tease the crowd with an electro version of ‘Mr Brightside’, with nobody quite ready to bid farewell, least of all the band and the biggest singalong of the weekend erupts when the band unleash the original version. Brandon tells the crowd, “we love you as we get to do this, because of you” and the band finally leave the stage. It’s clear that this show was a life affirming moment for the band and their fans. 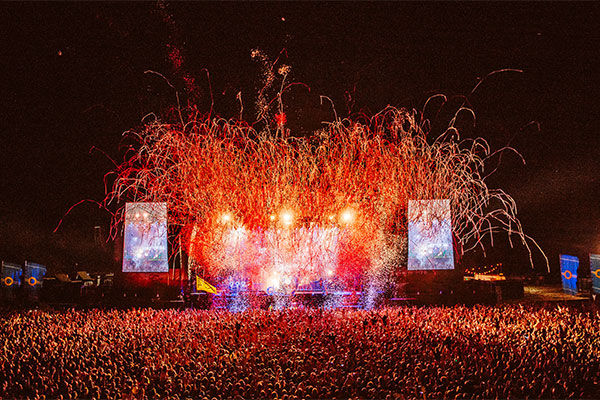 Visit our photo gallery and video gallery for all of the visual pleasures from Latitude 2018.