We interviewed IDLES’ frontman Joe Talbot before the band’s exhilarating BBC Music Stage performance at Latitude 2018 to talk about their forthcoming album, ‘Joy As An Act Of Resistance’.

Last year IDLES placed themselves firmly in Latitude’s heart when they played two explosive sets on The Lake Stage and The BBC Music Introducing Stage. Making a triumphant return to the festival this year, their set on the BBC Music Stage made them once again one of the most talked about bands of Latitude 2018.

Opener ‘Heel/Heal’ brought the biggest mosh pit of the day, Joe announced the gender of the unborn baby of a couple in the crowd, new tracks from ‘Joy As An Act Of Resistance’ were unleashed, guitarists Lee and Mark went crowd surfing and two members of the audience temporarily joined the band with one guy taking a ride on Joe’s shoulders – it was legendary.

Speaking with IDLES’ frontman Joe Talbot before their set he shared with us why last year’s performance was “magic”, what you can expect from their forthcoming album and who he was looking forward to seeing at Latitude 2018.

You played on The Lake Stage at Latitude last year and after your show you ran up the hill into the woods with the crowd behind you to perform again on the BBC Music Introducing Stage. How was it for you?

Magic. I like situations where you can use the unexpected as a tool for fun; it was an amazing crowd and we thought try and make it more fun, drag everyone up to the forest – so, yeah it was a dream.

It was a special  moment…

Yeah, it was really cool. It was a really nice surprise, I wasn’t expecting much because of the time slot… I came here quite a long time ago and it was great, it was amazing – I saw The Horrors. I didn’t know how we’d fare and I just thought sometimes people are uninterested, but they were great – it was a really wonderful crush. 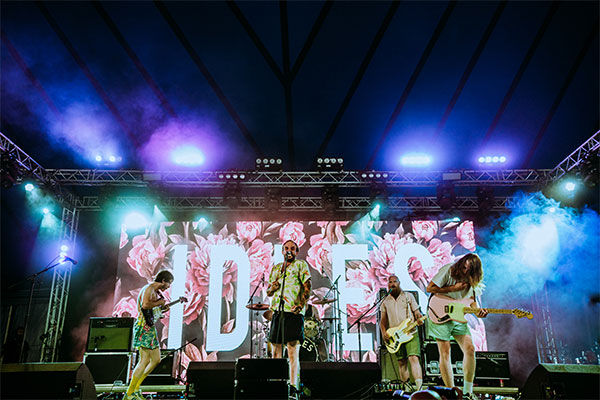 You’re playing today on the BBC Music Stage. What do you want the crowd to get out of the performance?

Same as any crowd, I just want them to feel like they’re free to have whatever kind of fun they want.

Your new album, ‘Joy As An Act Of Resistance’, is coming out on 31st August. What evolution has there been from your debut album, ‘Brutalism’?

We’ve changed as people, our lives have changed, and we try to be as a diegetic with our music as possible, so it’s changed with us – it’s progressed. We’re having more fun with our music and playing and having more fun recording and just trying to be as mindful in the present as possible and just enjoy each day as it comes. Musically it sounds more like IDLES than the first album does, because we’ve become more automatic with it and enjoying ourselves more – it’s great, it’s magic.

Yeah, definitely. I’m sober and I am in a better place, I’m harder working and more focused – happier. I think we’re most concise as musicians and more concise as writers.

You toured ‘Brutalism’ pretty heavily. How did that shape you as a band?

It bonded us – you learn a lot. We as a band, we’re quite mindful of our situation and we’re very grateful for where we are and we understand that’s down to our audience; we want to work hard for them and for each other and that means being mindful of each other’s space – both in the van and in our music.

You can hear there’s more dynamics in the second album and we allow each other to breathe more as people. We’re definitely a better touring band now, we’re better live, because we’re enjoying each other.

Do you think as a society we’re too focused on the individual right now?

Yeah, absolutely I think people are – I don’t think it’s their fault that they’re selfish. I think we’re in a point – after two recessions and a lot of hateful campaigns from both sides of the government – people feel defensive and scared for their future. I think when people are scared for their future they try to keep themselves safe and selfish, because that’s how you keep people indoors and build walls instead of bridges – I think people are just generally scared.

By keeping people scared it stops them being reactionary or making change or collectivising.

It stops people from thinking creatively and being open minded, because all they’re worried about is themselves and there’s this constant feeling of attack from all different sorts of ideologies. I think the sooner people realise, the sooner they’ll have that open mind again to a more open future.

When you play live, like later on today, is that an attempt to build community?

The community’s here. We don’t need to build it, we just need to encourage people to feel safe.

‘Colossus’, the first track you released from Joy As An Act Of Resistance, is one track in two parts – starting off intense and exploding at the end. How did it come together?

We wanted to write a cinematic opener to the album that was also a red herring. The intensity of the track reminded me of my anxiety and my anxiety towards wanting success and wanting to fit into barriers. I wrote it about my fears of not being a successful man, a successful artist, a successful person.

Would you say this is an album where you’re very exposed and you’ve opened yourself up?

‘Brutalism’ you had so much success around the album and you kept getting bigger with every show. How did that put pressure on you?

There were pressures at the start of the album. We started writing the album and soon after we started it we realised there was a lot of anxiety in our writing; we were writing songs that weren’t really sounding like us, they were sounding like a band we thought that people wanted us to be and we scrapped all those songs. We  started again and enjoyed ourselves.

Well, I think it just came at a point, similar to first album, where I stopped caring. I had trauma in my life and I wanted to feel free of the bullshit. When you’re down you need to rely on the people around you to get up and I had a really amazing support network of people that I loved who helped me get through that and realise that it doesn’t matter – none of that shit matters, we’ve got to write an album for us as artists and for people as people, and encourage people to enjoy themselves and ourselves as a catharsis.

Who are you looking forward to seeing today?

We actually supported The Breeders in Portugal recently and they’re wonderful human beings and an amazing band. I look forward to playing at a festival with them anywhere, every time – they’re f**king amazing band.

IDLES new album ‘Joy As An Act Of Resistance’ is released on 31st August 2018.

Get ready for more unforgettable performances when Latitude 2019 returns to Henham Park from 18th-21st July 2019. Tickets on sale soon.