In our Latitude 2018 Friday Highlights Part 1 laugh out loud with QI Live, be moved by The New Adventures: Swan Lake, get inspired by Benjamin Clementine, embrace the surreal with Bridget Christie and much more.

The brand spanking new, pearly white Comedy Arena tent is looking resplendent this morning, and it’s about to be christened with the razor-sharp wit and filthy humour of, QI Live.

Presenter Sandi Toksvig treats the crowd with the first brand new QI opening titles in 17 years, before introducing the teams like wrestlers into a ring – Alan Davies and Lou Sanders on one side and Marcus Brigstocke and Rachel Parris on the other – only here they’re flexing comedy brawn not muscle.

We all know QI is about giving obscure answers, not the right answers and today the panelists deliver. When Sandi asks, “Which animal goes twit twoo?” She encourages the crowd to scream ‘TWIT’ about Donald Trump. Marcus gives everyone nightmares when he ponders how to zip a 200 feet long bootlace worm, the longest animal in the world, into a sleeping bag. All of the panelists reach for the gutter when Sandi hands them a rubber glove and rice, and asks them how they’d use it to get a criminal suspect to confess.

An educational, absurd and downright debauched set, QI have us chortling well into the afternoon.

The Theatre Arena is full of people eager to catch a glimpse of the feminist wonder taking hold as the brand new hip-hop musical from Rebecca Phillips and Mark Hodge, Suffrageddon, takes to the stage.

Suffrageddon tells the story of Emmeline Pankhurst and the fight for women’s right to vote; with a solidly enjoyable focus on women of colour finally being able to tell their interpretation through the medium of beats and hip-hop.

Performers Roxxxan, Oracy Chambers, Aminita Francis and Koko Brown revel in their long fought victory to take up space, with the weight of the subject matter made that little bit more important given the ongoing mistreatment of people of colour in societies across the world. 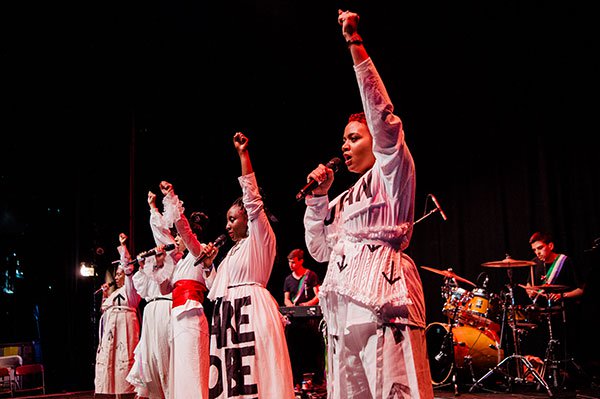 All you need in the beautiful surrounds of the Sunrise Arena is the perfect soundtrack and we’ve found that this afternoon with the blues-soaked sounds of Charles Watson.

Taking time out from Sheffield stalwarts of the indie scene, Slow Club, to go solo – Charles is definitely on a path of evolution not revolution with his new debut album. And, when you have a distinct sound that has enchanted fans for more than a decade this is no bad thing. Instead, it feels like he’s taken his time away to dig through crates of classic vinyl, looking for sounds he can twist in the Watson way.

He’s an unassuming but effortless front man, hooking people into the tent with a light charm, as he jumps from pouring his heart out to mocking his stripy ensemble and playing up the old-school ice cream salesman.

There’s not many better ways you can spend a Friday afternoon, and his debut ‘Now That I’m a River’ should be top of the list of albums to look out for when you get home. 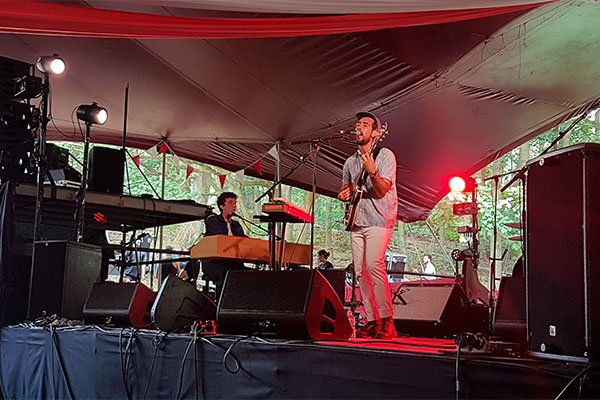 Laffa is a zingy, colourful stall for a zingy colourful lunch! Spicy, succulent chicken and crispy halloumi is wrapped up in a pillowy pita bread and crammed with crunchy cabbage, carrot and onion. The soft texture of the pita and chicken combines perfectly with the crunchy freshness of the salad and the herbs and punchy dressing result in a healthy, delicious Mediterranean delight. Enjoy! 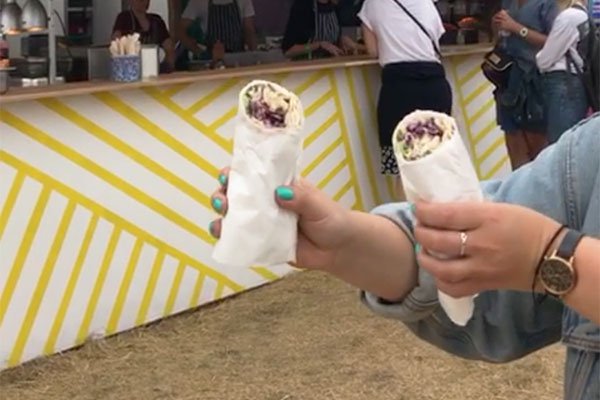 As the old adage says: leave them wanting more. And wanting more was the overwhelming consensus at the packed The Waterfront Stage front-to-back (and a whole lot on the bridge too) for New Adventures’ glimpse of the classic and award-winning, Swan Lake.

The duo commandeered the stage, normally used to a cast of far greater numbers, with ease. The pair had an ever flowing dynamic between them, a visual language that was pure yin and yang. They both bounced between dominance, their physical presences contouring to their constantly changing roles with dazzling fluidity.

A workshop followed lead by the performers for for the many inspired souls in the audience. A new cast of young and old warmed up to a pumping 80s soundtrack, then learnt how the flick of a wrist and the swoosh of an arm translates into the graceful movements just seen on stage. None of them woke up this morning thinking they would end up in the stewardship of a world-class dance company, but then Latitude is always full of surprises. 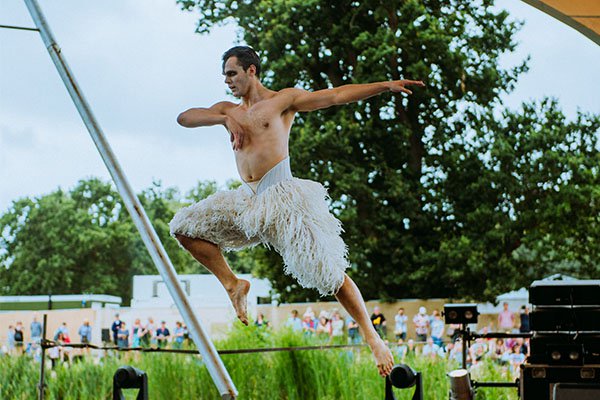 Winner of the 2015 Mercury Music Prize for his debut album ‘At Least For Now’, Benjamin Clementine’s appearance on the Latitude main stage in the Obelisk Arena is one to be heralded. A once homeless teen on the streets of Paris, Clementine today delivers the set of his lifetime. Songs from both his albums highlight the progression of a man who puts his heart and soul into every chord played and note sung.

Flitting around the stage and between instruments, Clementine blends together music and monologues that nestle in well under the blistering Latitude sun. Families, couples and friends soak up the welcoming atmosphere as Benjamin Clementine encapsulates everything that is to be celebrated about diversity within the UK. 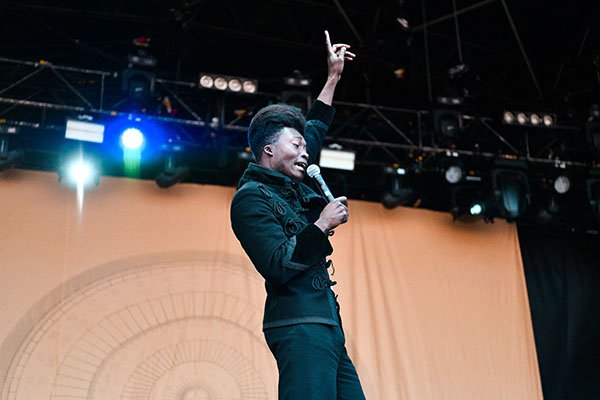 And You Will Know By The Trail Of Dead

Special “only at Latitude moments” have been plentiful today, and they keep coming as And You Will Know Us By The Trail Of Dead take to the BBC Music Stage to play their seminal 2002 album, ‘Source Tags & Code’, in full.

The gloriously scaling chords of opener ‘It Was There That I Saw You’ has the same giddy euphoria as 16 years ago. With every track the band build the record’s magnetising intensity, brick by brick with rage, angst, apathy and elation as the cement.

It’s a set that’s steeped in history and poignancy; Before ‘Relative Ways’, Conrad reveals how the track was written during a bad time and is about hope and how we need that right now; as he screams “it’s alright it’s ok it’s coming together in relative ways” you can tell he means it down to his bones. Closing with classic ‘Mistakes And Regrets’ there is nothing to mourn, only celebrate about And You Will Know Us By The Trail Of Dead’s set.

Bridget is struggling. She says so herself. Not because of her herb garden, her antique cigar cutter or her self-closing kitchen doors. She’s struggling because of Brexit, the rolling news cycle, and the fact her dishwasher might be a terrorist.Such is the world of Bridget Christie.

As our first headliner in the Comedy Arena, Bridget jumps from satire to surrealism at such a blistering pace they begin to interweave. The crumbling nature of truth sits side-by-side with her son’s love of Nerf like they’re kindred spirits.

Naturally with outside events taking place, Trump is a hot topic for both the charged performer and crowd. But it’s a sprawling conversation with her daughter that gets the biggest reaction, who receives a barrage of the real world when all she wants is a lollipop. A fantastic end to the first day of comedy. 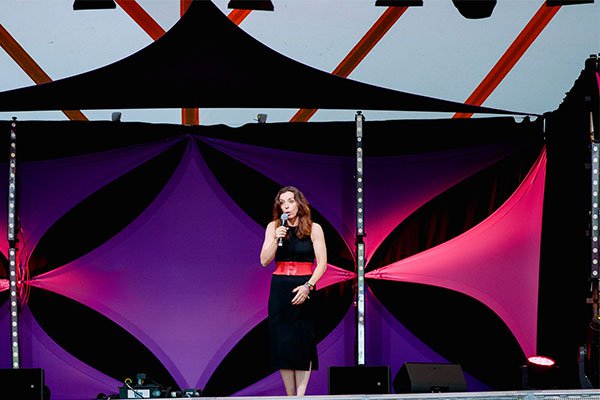 In our Friday Highlights Part 2 we’ll give you a dazzling glimpse into sets by Belle and Sebastian, IAMDDB, James, our spectacular headliner Solange and more.

Visit our photo gallery and video highlights for more heavenly highlights from Latitude 2018.

Latitude 2020 Bumper Quiz – Put Your Knowledge To the Test! 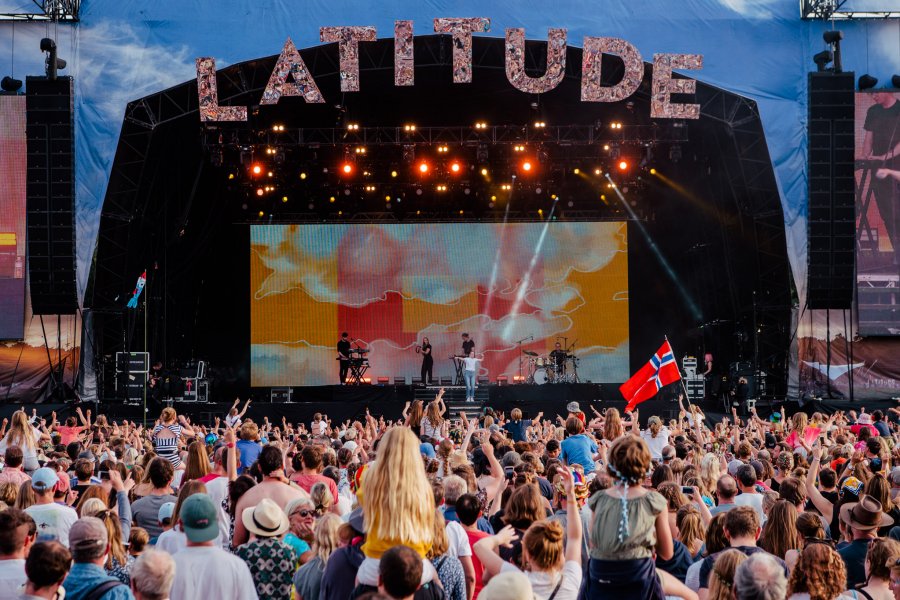 Spectacular Deals in Our January Sale! 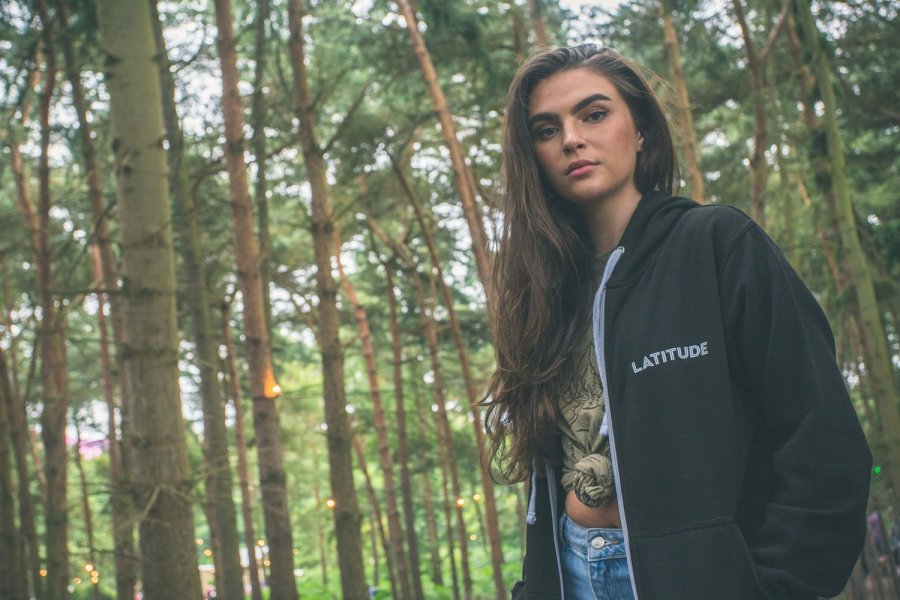