To celebrate International Women’s Day we caught up with multi-award winning comedian Felicity Ward to talk about her upcoming performance at Latitude 2019, her latest show Busting A Nut and the Guilty Feminist podcast.

Over 50% of the comedians announced so far for Latitude 2019 are women and we cannot wait to see them raise the roof of the Comedy Arena this July. One of these phenomenal comedians will be Felicity Ward, who’s already been giving audiences laugh out loud moments guaranteed to bust a major organ with her latest show, Busting A Nut, which was nominated for Best Show at the Edinburgh Comedy Awards.

As well as doing stand up comedy for the past decade, Felicity Ward regularly co-hosts the Guilty Feminist podcast with Deborah Frances-White which has had 50 million downloads and counting. Last year, the Australian comedian also launched her own podcast Appisodes on BBC 4 to explore the weird and wonderful world of mental health apps.

In our interview with Felicity Ward she told us (in-between the odd acapella of Womack & Womack’s ‘Teardrops’) why you’ll all be doing the chicken dance with her at Latitude 2019, what needs to happen in comedy to make #balanceforthe better a reality and how a fart joke got her the Edinburgh Comedy Award nomination for ‘Busting A Nut’.

You performed at Latitude in 2014 and 2016. As a comedian what do you like about performing at Latitude?

It’s a pretty f**cking big tent, it’s a real challenge – that’s why I’m so excited this year. A couple of years ago when I played I was not in a very good mental place, I was very burnt out and I had a lot of mental health stuff going on. It was something I really wanted to do but the actual experience of getting up onstage, there was a bit of me just getting through it.

This year I’m in such a better place. It’s really revered in the industry too; playing the big comedy stage at Latitude is a really big deal in the comedy industry. I’m just excited to be looking forward to it and knowing how much fun it’s going to be; that I don’t see it as, ‘right, I’ve got to do a half an hour’. I’m pumped about having half an hour with people and seeing what we can get up to.

In three words what can people expect from your Latitude show this summer? 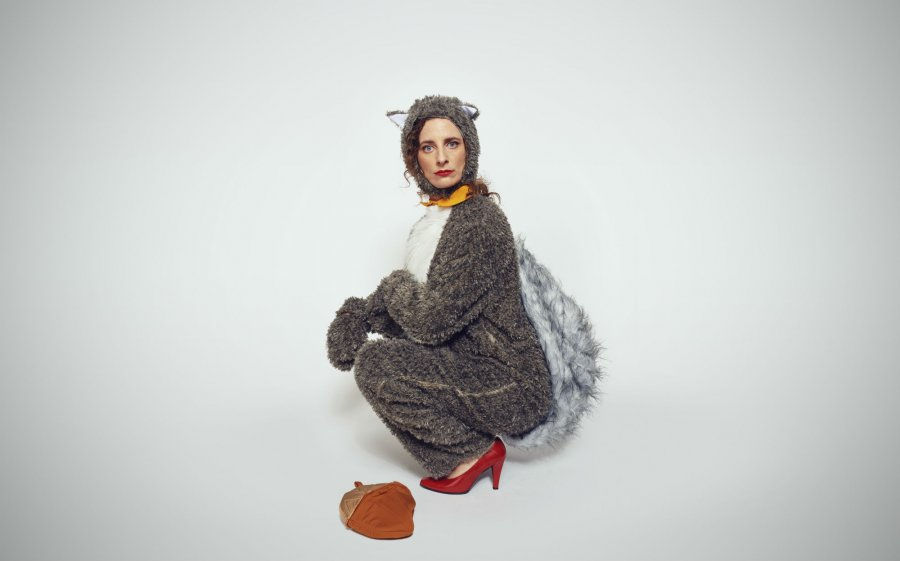 What are your favourite memories of Latitude Festival?

Hall and Oates were incredible – I love Hall and Oates. There is an element (I don’t mean to sound patronising) of nostalgia when you go and see a band that’s been about for a long time;  you give them a bit of a pass, you don’t expect them to be at the top of their musical game.

There was one song,  I can’t remember what song they played, there was a seven minute saxophone solo in the middle. You guys lived through the late 70s and I appreciate this – they were apologising for nothing – it was amazing.

Your latest show Busting A Nut was nominated for Best Show at the Edinburgh Comedy Awards. What are you most proud of about the show?

Probably the 30 second performance art fart noise that I make. I’ve never done a joke about farting, I don’t think I’ve ever done a joke explicitly about farting in a show before. It feels like a wonderful insult to the award that 10 years into my career I make a fart joke.

The other thing was doing a show that just jokes start to finish: no theme, no lessons, no moral.  If anything you get dumber by the end of it and somehow that got a nomination.

Where did you get the inspiration for the material?

It’s sort of the opposite of inspiration, in previous years something would come up and I’d go, ‘maybe I can make a show about that’…Because I took a year off, I just wrote all these routines in clubs and they had to be robust enough for weekend clubs. I got to two years later and went, ‘I’ve got 45 minutes of club material here’.

I think sometimes club material can be used as a pejorative, but what I really mean is that the jokes are a lot tighter than if I’d experimented with them in the context of a preview and let them breathe and get into some storytelling or exposition.

In your previous shows your materials been on your issues with anxiety and depression. In this show, but it’s not as dominant as it was before. Was it a conscious decision to step back from that?

No, I thought when I was putting the show together I thought I’d get a theme, I’d get a story, I’d get something together and it just didn’t happen, mate. I tried and it wasn’t there and I’m not going to force it.

The positive side effect has been that I’ve not had to deal with it [depression]. If I had done a show like that, I would be fine about but I’d have to deal with it. It was an afterthought that when I started doing this show and it was just fu and that’s all it was. It was like ‘oh my god, I don’t have to dig deep to figure how I’m going to do this show 40 times’.

I don’t have to figure how to emotionally protect myself doing a show like that. It’s just like I’m just going to be balls-out funny for an hour and it turns out that’s super fun. It’s not to say I won’t do other types of show, but it was very liberating.

What do you want people to take away from the show after seeing it at Latitude?

With a festival where’s there’s so much time and people could be seeing anything l always feel grateful that they’ve chosen to see me even if it’s just getting out of the sun. I just want people to feel it’s worth their time.

You mentioned earlier your Radio 4 show called Appisodes. Out of the made up apps you talk about on the show, what app would you like to exist in real life?

All of them are versions of ones that exist already; they’re all based on combination of real ones. There’s one called Calm that I use all of the time and I just thought it would be funny if they all had backstories and they had dark pasts.

If you could invent any app, what would you have it do?

Probably an app that would not let me look at my phone until I’d completed certain tasks, like had a shower and breakfast and meditation… All I’m saying is, I need a parent. 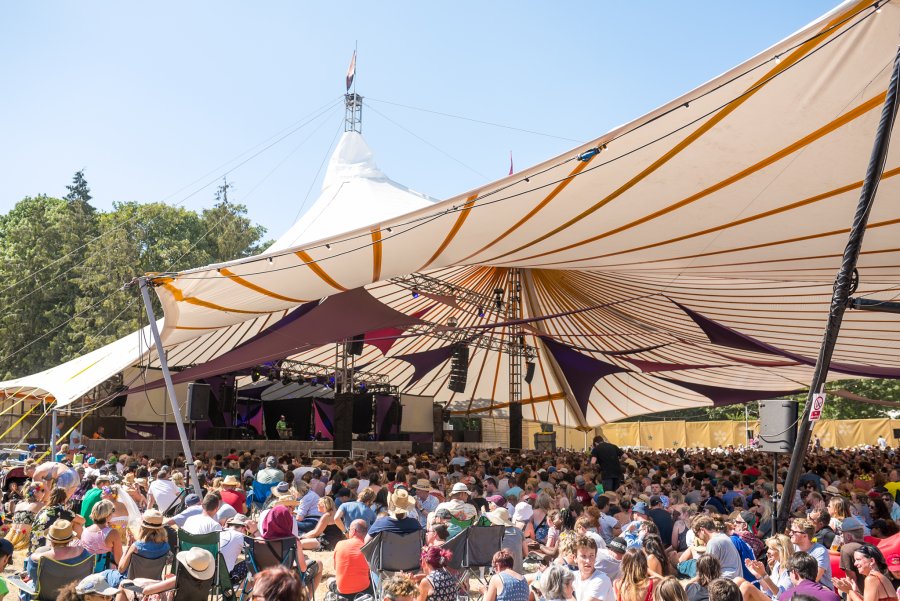 You’re also the co-host of the Guilty Feminist podcast. What’s your most memorable  ‘I’m a feminist but…’ confession?

One that I did recently on an episode that hasn’t come out was when I was in Australia. I was at a set of red lights and there was a guy in a van (a tradie in a van) he was next to me and we were both turning right and the lanes merged so we both turned right. My car went faster than his car, so he had to pull behind me. I’m a feminist but I still thought ‘haha, you were beaten by a girl’.

Who would you most love to have as a guest on the Guilty Feminist?

Mona Chalabi. Have you seen The Fix? It’s Katherine Ryan and Jimmy Carr’s show on Netflix…They’re trying to make panel shows in America and they have American guests – it’s a really fun, light show. It’s probably got a bit more warmth or a little less competition than British panel shows.

You probably wouldn’t get an answer, you might get some dance moves though.

I’d get some dance moves, I’ll get some wheat field chat maybe about the time she scraped some off jam out of a jar – it’ll be thrilling.

It’s International Women’s Day this week and the slogan this year is #Balanceforthebetter. Do you think gender bias still exists in comedy?

Of course there is. It’s certainly not as pronounced as it was and sometimes being a woman in comedy helps. When I started in Australia a decade ago they’d actively started to look for women on TV, so I benefited from that as I was a very cocky 28 year old.

Even a few years ago I remember going to gigs, and again that internalised sexism, where if a woman got up on stage to do stand-up my first thought was, ‘please be good’. What you don’t get usually is the same liberty to just be a shit comic, we’re always a ‘shit female comic’. As has been said a lot of times before female is not a genre, but that’s still got some unpicking to do.

I had someone recently say, ‘it was really good as you didn’t do any stand-up about being a woman’. I had a bit about red lipstick and the confidence it takes and I a bit about the word ‘slut’ and I had bit about drunk women in the toilet. Other people will say that in the same set, ‘oh, all she does is talk about female issues’. Well, is it funny? That’s all you need to know and if it wasn’t it wasn’t funny. That’s it, that’s the end.

The Commissioning Editor of Comedy at ITV, Saskia Schuster,  launched a ‘comedy 50:50’ initiative last year to address the gender imbalance as currently only 11% of comedy writers for television are women.

We’re just not getting employed. A friend of mine has had to move to America and is doing incredibly well over there but can’t get work over here.

I think it’s that thing where you’ve had a hundred years to employ us, you haven’t been, so that’s why quotas have been invented. It’s fine to say it’s a meritocracy and people should be given jobs on merit, but when that happens it always swings towards men.

Who are you looking forward to seeing at this year’s Latitude?

You’ve talked about your issues with IBS in your  2015 show ‘What If There’s No Toilet?’ and in Appisodes. What advice would you give for using festival toilets?

Always have a packet of tissues and bring your own antiseptic handwash…And, if you’ve got an artist pass that really helps!