6 Things You Didn’t Know About Sigrid

Today Scandi-pop sensation Sigrid is celebrating her 23rd birthday. It’s already been an incredible year for the singer-songwriter that started with the release of her critically-acclaimed debut album, ‘Sucker Punch’. And, who could forget that euphoric performance in the Obelisk Arena at Latitude 2019.

So, in honour of the big day we’re counting down the 6 Things You Didn’t Know About Sigrid.

At Latitude 2019 Sigrid jumped, danced and clapped along with us for her entire set on the Obelisk Stage. So, it comes as no surprise to learn that the Norweigan singer-songwriter has a background in dance.

Speaking to The Line Of Best Fit, she revealed: “I danced for probably ten years, so I did ballet, modern, jazz, and hip hop”. However, you won’t see her mixing any of her dance training into her shows anytime soon. “I love dancing, but I never thought my songs would fit choreography on stage. It felt more natural just to jump around”.

2. She’s duetted with a labrador

Yes, a labrador. Whilst playing a show in Las Vegas a labrador just casually walked on stage and stayed for two songs.

“He belonged to another band backstage”, Sigrid explained to the Evening Standard. “He wouldn’t move, so we did a couple of numbers. It’s the strangest duet I’ve ever done”. 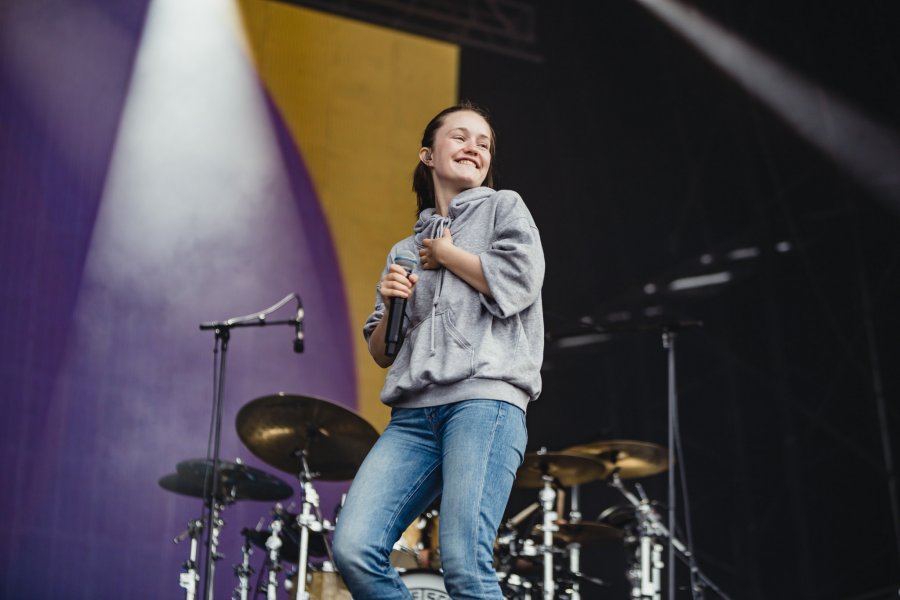 3. sigrid’s family were a big influence on her becoming a musician

Sigrid grew up in a household with parents who filled it with the sounds of Joni Mitchell and with siblings who played music. She briefly formed a band with her sister Johanne called Sala Says Mhyp – in tribute to their deceased cat, Sala.

But, it was her older brother Tellef who would put her on the road to becoming a singer-songwriter in her own right. He invited a then 16 year old Sigrid to open up a show he was playing, but with one condition – she perform an original song.

“It felt like my coming out as a songwriter,” Sigrid explained when talking to Interview Magazine. “That was the first time that I made something by myself, like, ‘Here it is, and I don’t know if you’re going to like it or not.’ ”

4. At Latitude 2019 Sigrid met the “crying fan” from Glastonbury

At Glastonbury 2019 Sigrid spotted 13 year old super fan, Nina, singing along to all of the words during her set and crying many happy tears. After the show Sigrid posted on Twitter that the fan was “the biggest legend of them all” and asked, “can we find out who this girl is???”.

The internet answered her call and Nina and her Dad Adam were off on their way to meet Sigrid at Latitude 2019. After meeting her hero, Nina said: “It was such an incredible moment”.

do you remember Nina from @GlastoFest? she had this insane energy throughout our whole set and honestly she was the star of the show 🤩 I met Nina and her family yesterday at @LatitudeFest and yes we had a great time ❤️ also great show, thanks a lot for having us again! pic.twitter.com/Zl0lH3OS5Z

5. Growing up Sigrid’s dream career was to work for the government

As well as dabbling in dance Sigrid had another career aspiration when she was growing up – working in politics. And, it very nearly became as reality as she went to university to study politics for a couple of months.

“Honestly, growing up, one of my biggest dreams was to work in the Norwegian government in the Department Of Culture,” Sigrid said to GQ Magazine. “Politics and human rights was my favourite subject in high school”.

Thankfully, politics’ loss was our gain as she dropped out to become a singer-songwriter and make pop history with her debut album, ‘Sucker Punch’.  High-five to that!

Anyone who’s a fan of Sigrid knows she loves Adele, but there’s another musician who’s had a big influence on her – Neil Young. Growing up in the remote port town of Ålesund, Norway Sigrid listened to her parents playing Neil Young’s records. And, her admiration for the ‘Heart Of Gold’ singer-songwriter didn’t stop once she’d left home.

“That’s what I like about Neil Young. You can hear it in his voice. His voice is so full of emotion,” Sigrid explained to the Yorkshire Evening Post last year. “He’s not necessarily the greatest singer on Earth, he’s a good singer, but it’s the way he sings it. It’s so emotive and beautiful.”